A downloadable game for Windows

V2 EL MAXIMO EDITION, AFTER A YEAR OF FINE TUNING, NOW WITH ADDITIONAL CONTENT, NEW REGIONS, NEW ADVENTURES, NEW GAME MECHANICS, NEW CHARACTERS AND AN ALL NEW ENDING AT THE END OF TIME BEYOND IMAGINATION !!!

THE FIRST 1000 PURCHASES  WITH STEAM ACCOUNTS WILL GET A FREE STEAM KEY  ISSUED AFTER PAYMENT IS RECEIVED !!!

After more than 20 years of development, the greatest roleplaying game of them all is finally ready for release! Grimoire is an homage to the classic dungeon blobbers and is inspired by Wizardry, Might & Magic, Lands of Lore, Anvil of Dawn, DungeonMaster and the Eye of the Beholder games!

In order to download this game you must purchase it at or above the minimum price of $9.99 USD. Your purchase comes with a Steam key. You will get access to the following files:

Has anybody tried it on linux with the wine compatibility layer ?

Is there a way for the author to build a linux exe ?

Lots of people have had success running Grimoire under Linux with Wine. There are specific instructions here :

OLD school.  In both good and bad ways.  On standard difficulty you will be save scumming each encounter in the beginning, then cheesing your way to victory in the middle and end.  Not as good as the games its trying to mimic from the 90's, particularly  with combat, and the audio is repedative to the point of agony.

However - with all that said - its got a really impressive amount of dungeon maps, and its got a lot of secrets and rewards exploration.  Definitly if you like the wizardy games and those of that ilk then its a good game at the price.  wait for a steam sale if not.

I noticed Steam got a 3.0.0.0-update. Could you please add it here too? And could you release a changelog? I'm eager to play through the game again and am very interested in what kind of changes the game has now.

The coming update for Itch.io will probably be 3.0.0.2 with PDF manual. I am just waiting for it to go live on another vendor first before I update Itch.io here.

Ok I understand. I'm very curious about the new content.

I love it! It feels exactly like a game from back in the heydays of the genre but is at the same time very playable (imho much more so than the old Wiz 7 which seems to be Grimoire's main influence). Be warned though: The game is hard as nails and will need some time to get into but after that it opens a world full of wonders, intricate puzzles and great possibilities. It's a modern classic in my opinion.

edit, after almost three months since my "first contact" with Grimoire: This game is massive! I'm still only around 20 % of the whole game (says the counter) and there is no end in sight. What's the most impressive for me: It  keeps me hooked:  My party really grew on me, I still enjoy exploring the many areas, collecting treasure, discovering secrets, finding the forbidden magic. And I enjoy the writing, it's well written prose and a pleasure to read. I immediately liked the game when I first tried it three months ago but now I'm sure I'll keep it with me for the years to come.

edit2 - after six months in Hyperborea: I'm around 56 percent now and still fully engaged. The game maintains its high quality in writing and dungeon design. After hesitating at first I now really enjoy the possibility of multiclassing and was able to create all the prestige classes with my party (the Jester is a real killer). I don't remember a single game where I invested so much time and felt so perfectly entertained for so long.

Thanks for this review. Could you cut and paste this review over at Steam if you have a Steam key? I am so close to getting Grimoire into positive ratings, I just need a couple more to push it to 70%.

Hello Cleve, thank you for this unique experience! I finally managed to finish the game and I'm still under it's impression, weeks later. It's definitively one of the most profound gaming experiences I ever had (I wrote you an email about my final thoughts some weeks ago, right after I finished the game).  I already wrote a review on Steam, back in June if I remember correctly. The name is Wolfram_von_Weissenthal.

Forget everything you've heard about the development of this game, and just dive in, pretending it's a classic blobber from the 90s that you missed back in the day.

Grimoire is a dungeon crawler most reminiscent of Wizardry 7 and Wizardry 6.

in this game your party of 8 self-created or pre-made heroes (consisting of vampires, drakes, giants, saurians, fairies etc.) are on an epic quest to restore peace in the fairtytale-like world of Hyperborea.

you'll explore a vast open world made up of lush forests, dangerous dungeons, water areas, mountains and towns and battle enemies in turn based combat or solve intricate puzzles.

a game like Grimoire hasn't been released since Wizardry 7 and it is a must play for every RPG enthusiast. it is made by a single man and still puts all the AAA RPGs made by big developers to shame. big thumbs up and I'm already dying to play a second roleplaying game in the same world as Grimoire or maybe even in a new setting. 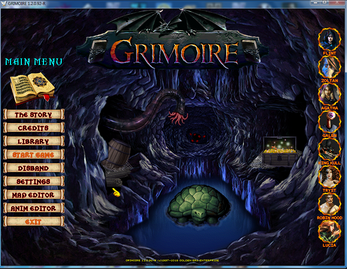 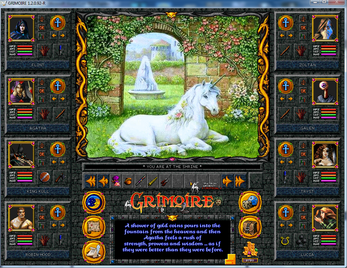 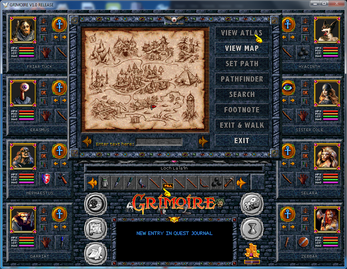 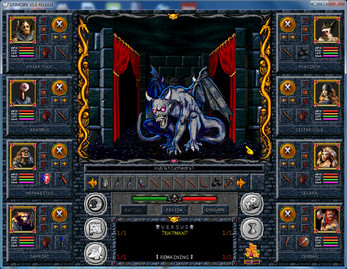 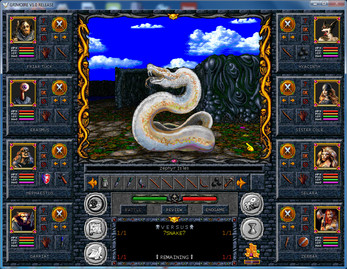